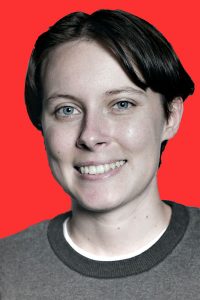 Growing up in California, Annie developed her love of filmmaking while making YouTube shorts with her family. While in college studying to become a marine biologist, she renounced the STEM field once she realized she’d have to take calculus. Luckily, she was a better sound designer than she ever was a scientist. After receiving her BA in Cinematic Arts and Technology from Cal State Monterey Bay, she made the move to the Savannah College of Art and Design to pursue a Master’s in sound design. While in school, she was nominated for a Verna Field’s MPSE Golden Reel Award for her Foley in the short film “Time.”

Annie became an intern at Alchemy after graduating and has since worked as Leslie’s apprentice artist and is currently a full-time editor. Her transition from the stage to editorial was a blessing in disguise, because now she knows that it’s significantly more expensive to buy Foley shoes when you’re shopping in the women’s section. When she’s not cutting away at the studio, Annie enjoys playing video games with her wonderful partner and two cats. They aren’t very good.