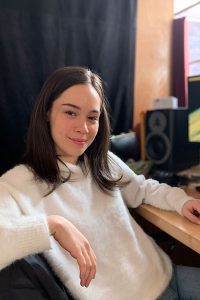 While earning her fine arts degree from Parsons the New School for Design, Laura enrolled in a sound design course on a whim, which sparked her interest in electronic music and sound. Since then, she has scored music, designed and edited sound for films and episodic television.

After working for various post production sound studios such as Harbor Picture Company and Explosion Robinson, Laura transitioned into Foley art and editorial. She joined Alchemy Post Sound’s Foley team in early 2017, and is now a Foley and sound effects editor.

Laura’s work includes television shows like High Maintenance, The Looming Tower, and Berlin Station as well as films like The Blessing, Don’t Worry (He Won’t Get Far on Foot), and Monsters and Men.